The majority of Kabul’s cinemas cater largely to audiences of young men, and tend to show Bollywood films produced in Pakistan and India. For some young Afghan men, the cinema is a rare occasion for public expressions of joy: audience members cheer on the films’ heroes and sometimes dance along.

For most women, however, fears of harassment in a male-dominated space have made cinemas feel unwelcoming.

“I can’t imagine an Afghan woman being comfortable sitting in a dark room with hundreds of men,” said Jonathan Saruk, a photographer who has documented the cinemas of Kabul.

This year, however, in an attempt to revive film culture in Kabul, the documentary maker Diana Saqeb Jamal launched a new venture: I-Khanom, a cinema that aims to provide a safe environment for women and families to watch films. The name means Lady Moon, and comes from a city supposedly founded by Alexander the Great.

The opening night featured a screening of The Orphanage, a 2019 drama directed by the Afghan film-maker Shahrbanoo Sadat, to an audience primarily made up of women. Most had never seen a film in a cinema before.

“Going to the cinema has become taboo, especially for women,” says I-Khanom manager Shahim Nadery. Most parents, he says, would not allow their daughters to attend.

I-Khanom, the newest addition to Book City Cultural Centre, which also includes a cafe and art gallery, is different. “It all started from the environment we build in Book City,” Nadery says. While many women in Kabul don’t feel secure outside their homes at night, Book City has earned a reputation as a safe space for cultural activities.

In 2014, a suicide bomber attacked a film screening at the French Culture Centre in Kabul, killing several people and injuring at least 15. The centre had been one of the few places that was welcoming to both film-makers and female audience members. The bombing was another blow to cinema culture in Afghanistan, a vibrant tradition that has largely been lost over years of conflict.

I-Khanom is an effort to move forward from that blow. It holds special women-only showings every Tuesday afternoon, while Fridays are dedicated to families with children. Students from the faculty of arts at Kabul University, home to one of the country’s few cinematography schools, make up a big part of most audiences.

“It will take time for people to have trust, but until then, we are doing our best,” Nadery says. “Even if we just have one viewer, we will prepare the hall so they feel safe to come.” 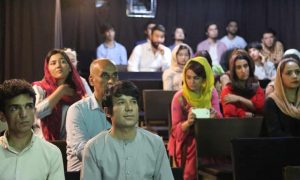 The I-Khanom team also hope the cinema can help support the Afghan film industry. Cinema thrived here in the 1960s and 1970s, but when the Soviets invaded in 1979 they imposed strict censorship rules, and when the Taliban came to power the production and viewing of films was banned entirely. Afghan Film Institute staff risked their lives to save the organisation’s film archives.

“We can’t say the culture of cinema is new,” Nadery points out. “It’s forgotten.”

He recalls an older audience member at I-Khanom sharing his memories of a time when movie screenings in Kabul were standing-room only. “When we heard that, it gave us this feeling of how lost we are.”

Today, Afghan film-makers rely on budgets from foreign organisations, and the movies they produce are often only shown outside the country. “We want to give our film-makers an opportunity where they will have an audience, to see that Afghan films have a market in Afghan society,” Nadery says.

That idea was partly tested in August when I-Khanom was one of four screens around Kabul to host the Afghanistan film festival, a 10-day event that celebrated Afghanistan’s 100th year of independence with screenings of 100 Afghan and Iranian movies. “People in Afghanistan love cinema,” says Aqal Pais, who helped organise the festival. “When people in Kabul came to buy tickets, they had a feeling of being alive.”

Times may be changing somewhat – in May, Sahraa Karimi became the first female general director of Afghan Film – but Afghanistan is still in the middle of a bitter, spiralling civil war, with civilians are being killed at a “shocking” rate, according to a UN report. As recently as 22 September, at least 40 civilians at a wedding party were reportedly killed during a raid by Afghan special forces on a Taliban hideout.

Nadery hopes I-Khanom can offer fresh hope in that grim context: “We want to provide an alternative, a source of entertainment so that even for five minutes, people don’t feel they are in a war-torn country.”